You would be forgiven for thinking that news of a machine that makes water out of air sounds like the stuff of pure science fiction, but Israeli engineers have made this fantastical concept a reality. The company behind the technological innovation, Water-Gen, hopes the technology will revolutionise developing nations by demonstrating a positive impact on communities suffering from lack of clean drinking water. Primarily intended for military and government use, the machines are finding new applications in the developing world. Water-Gen spokesperson Arye Kohavi has said "we believe that the products can be sold to developing countries in different civilian applications. For example in India, (drinking) water for homes is not available and will also be rare in the future.” The machines, known as ‘Atmospheric Water Generation Units’, offer a far more cost effective solution than alternative water sources - with a lower environmental impact. 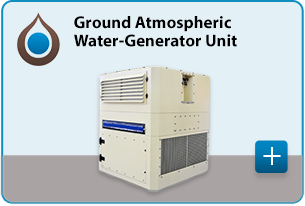 So how does it work?

The system is actually quite simple at its core, using a heat exchanger similar to those found in air conditioning units, to rapidly cool down hot and humid air. This causes the water in the air to condense, forming droplets, which are then collected in a tank inside the Water-Gen unit. The concept of air dehumidification isn’t new - however, heat exchangers are traditionally expensive to run, whereas Water-Gen have successfully created an ultra-efficient system, minimising electricity usage. The process doesn’t stop there either, as water in the air may be polluted by contaminants such as particles of dust or dirt which clings to the microscopic water droplets. To combat this pollution, the Water Generation Units employ a complex filtration system, removing any chemical or other contaminants - leaving behind nothing but clean and safe drinking water. Depending on the levels of water vapour in the air (humidity) and the outside temperature, the Units are capable of producing anywhere between 250 and 800 litres of drinking water per day - enough to change many people’s lives for the better. Especially considering that, according to Water-Gen, it costs as little as 2 cents per each litre of water produced - providing perhaps the most cost effective solution to date for charities and governments investing in water provision for those in desperate need.

Eden Springs works in partnership with People help People - One World - working on projects in Tanzania, Africa - to provide drinking water to those who need it the most. In fact, Eden Springs is currently helping over 1000 school children and thousands of residents in the Kilimanjaro area of Tanzania, providing access to life-saving water sources. Closer to home, we provide fresh drinking water to offices around the UK - check out our selection of water coolers, providing the ultimate solution to your employee hydration needs. We work hard to ensure that our water is both locally and sustainably sourced as part of our ongoing environmental commitment.