The all-important coffee break is an essential part of every employee’s working day, with these little slices of free time offering a chance to hydrate, caffeinate and socialise at your leisure. The classic British coffee break is pretty self-explanatory, with cuppas and chit-chat galore - but across the globe, cultural gaps mean that other societies have their own way of doing things. Tradition is a powerful thing - and coffee breaks around the world are subject to some very unique traditions. Let’s take a quick trip around the globe.

The Finns are among the greatest coffee drinkers in the world - and with coffee break traditions like theirs, it’s no surprise. The people of Finland consume an average of 12kg of coffee per capita each year - over twice the amount of other European countries. Considering the Finnish coffee prohibition of 1756, on top of Finland’s inability to grow its own coffee, this commodity has become something of a forbidden fruit over time. Today, though, working coffee breaks have reached the point of being statutory in Finland, defending every man and woman’s right to a cup of coffee - and a nice hot cup of the good stuff is still considered the ultimate means of expressing hospitality to visitors. So it’s clear that coffee is serious business for the Finns.

New Zealanders are avid coffee drinkers, fully committed to the caffeine institution. In NZ, coffee consumption increased during the 1940s as a result of American servicemen being stationed there (bringing their caffeine love with them) and the arrival of European refugees and settlers used to drinking coffee rather than tea. Since then, the latte scene has dominated New Zealand in cafeterias and office environments alike. To this day, tea and coffee are essential components of ‘smoko’ (New Zealand’s manual labourers’ smoking breaks), preserving a hard-won right for these workers. The country’s locals even rallied together in the name of the Fairtrade movement, participating in the world’s biggest coffee break, in which 40,000 coffee lovers took one collective coffee break across over 1200 homes, workplaces and schools in the name of ethical coffee trade. Now that’s commitment.

The Swedes take their coffee breaks very seriously - so seriously in fact that Swedish coffee break culture has its own name. ‘Fika’ is more than your standard coffee break, offering Swedish workers an opportunity to socialise, with coffee as a welcome bonus in the proceedings. ‘Fika’ is likely to be one of the first words you learn when visiting Sweden, as it’s such an integral part of Swedish culture. This social phenomenon can happen any time throughout the day, whether at home, during work or in the café, and is typically observed several times each day. 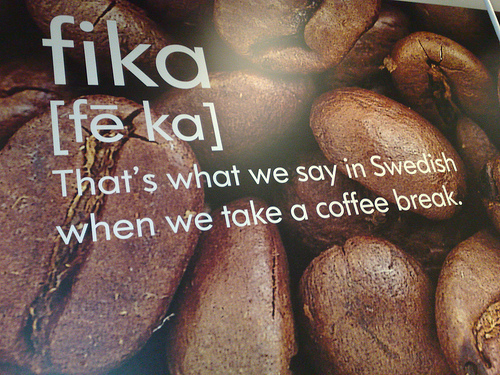 With ‘Fika’, the sweets are even more important than the coffee itself - with cakes, cookies and cinnamon buns all acceptable goodies any time of day. Thanks to this immensely popular pastime, the Swedes are among the world’s leading coffee and sweets consumers. For a range of delicious Fika-time recipes, take a look right here.

The American coffee break has a rich history, with its humble beginnings following WWII, when the country’s first coffee vending machines began to make an appearance. These rono-caffeinating Kwik Kafes, credited to Cyrus Melikian in 1946, made instant hot coffee accessible to the American employee, allowing workers to be back at their stations and ready to resume work within a matter of minutes. Today, the ‘coffice’ movement is sweeping the US, with American employees taking their workload to the source in order to stay as close as physically possible to their favourite caffeine supply. With the whole working day transforming into one long coffee break, it’s clear that workforces worldwide aren’t in danger of a caffeine crash any time soon. If you’re ready to get in on coffee break culture, Eden Springs can help. We provide state-of-the-art coffee machines and water coolers to offices throughout the UK, and can bring the coffee break revolution to your working day. Take a look at the full range now to get in on the caffeine action.