HomeBlogHow to reduce CO2 emissions and the greenhouse effect
Environment

Movility and transport concepts involve both the movement of people and cargo in all types of vehicles. These generate greenhouse gases, mainly CO2 emissions by cars, motivated by the burning process of hydrocarbons, derived from oil such as petrol.

Cars and cargo trucks are responsible for the majority of emissions, which have become a serious issue nowaydays and make institutions and individuals wonder about how to reduce CO2 emissions.

The issue with CO2 emissions in the EU

In Europe, the main source of pollution in cities is caused by greenhouse gas emissions. At least 25% of these are originated by transport.

While there are certain sectors that have been working on how to reduce CO2 emissions for decades, the car industry didn't become involved in this until the last years of the 2010s. This started being discussed in 2007, and the registered levels are still above those registered during the 90s.

Within the car industry, transport is the main issue, presenting more than 70% of polluting gas emissions.

From July 2016, a number of measures were agreed on to reduce the carbon footprint, which affects mobility, although this hasn't affected the EU's competitiveness so far. A new rule for 2020 will regulate CO2 emissions in cars, by implanting a label system which measures efficiency and emissions.

How to reduce CO2 emissions in cars

As responsible corporations and citizens, there are a number of actions that can be performed in order to reduce the carbon footprint. Some of these are more easily deployed than others:

Depend less on cars

Instead of choosing the car for commuting, it's advisable to pick between walking or cycling. Many cities have developed public bicycle systems, so that their mobility options improve.

Commuting can also be done through public transport or car sharing, instead of having each individual using his own car.

When planning your commute, it's advisable to create a route in order to make the most of a single trip. For instance, you can go to the supermarket on your way home after work.

Driving in an efficient way

The way people drive has a big influence in CO2 emissions by cars. The more agressive the driving, the more petrol the car consumes and thus the worse the pollution.

In order to reduce emissions, it's important to develop an efficient way of driving, using pedals smoothly and respecting speed limits. This will also lead to less spending.

An adequate maintenance makes engines work better and adjusts consumption. It's also helpful to install driving aids such as speed controls, to keep a constant speed and save petrol.

When the time comes to pick a new car, the best idea is to pick one that is as efficient as possible. Electric, hybrid or hydrogen-powered cars are the best examples. 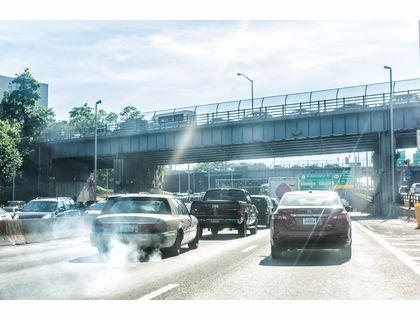